More than 350 motorists have been fined and 37 cars seized as part of a campaign to make roads safer in Batley and Spen.

The Batley and Spen NPT said they were determined to keep the pressure on unsafe drivers after concluding, for now, a winter blitz with Safer Kirklees over misbehavior on NPT roads.

During 24 days of action under Operation Torrbank, officers arrested and treated 369 drivers.

Three hundred and one tickets were issued for offenses such as speeding, insurance, seat belt, driver’s license, registration and many other traffic offenses

The operations saw both foot officers and police vehicles deployed to identified hotspots at key times during which they sought both to prevent dangerous driving and to take action against those who were in offense.

Officers from the TNP and colleagues from the West Yorkshire Police Roads Police carried out Days of Action in the areas of Batley West and East, Liversedge, Gomersal and Heckmondwike.

The operations saw both foot officers and police vehicles deployed to identified hotspots at key times during which they sought both to prevent dangerous driving and to take action against those who were in offense. 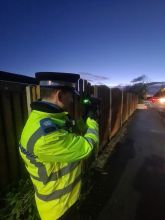 Funding for police resources has been funded by local councilors in Kirklees using the local members’ project fund, a ward budget which councilors can allocate to address specific local issues and priorities.

Inspector Rebecca Calpin of the Batley and Spen NPT, said: ‘We have been well aware of residents’ concerns about the instances of speeding and dangerous driving at Batley and Spen ahead of Christmas and I hope this action demonstrates that we, like our residents, will not. Tolerate illegal and dangerous behavior on our roads and near our schools.
“I would like to thank colleagues from our Road Policing Unit and partners at Safer Kirklees for their support in helping us mount these operations.”

“I am extremely happy to see that these operations have made it possible to treat 369 dangerous drivers and I can say with confidence that our roads are safer thanks to this work. Road safety and the fight against dangerous driving is a priority for the majority of our residents and I hope this operation will show that we are also committed to dealing with people who think they may be driving recklessly on our roads.

“My thanks go out to West Yorkshire Police for all their support in helping us carry out these operations and for the work they do every day to keep our roads safe.”

A different kind of education came to South West Gauteng College’s Roodepoort campus on February 16. Transport Education Training Authority (TETA) brought its road safety roadshow to students’ doorsteps to encourage responsible behavior on the road and pedestrians. Titled Phepha!, which is a Zulu term meaning “to be aware”, the campaign injects an energetic presentation […]

talabat kicks off its first UAE Road Safety Week on March 28, as it steps up its road safety strategy in 2022 to ensure the well-being of its growing fleet of drivers. The company said it would hold Road Safety Week frequently throughout the year. The campaign will complement efforts by the Government of the […]